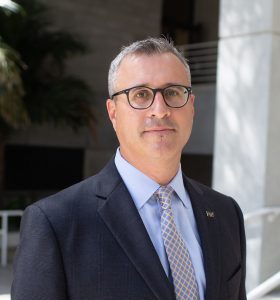 Bill will initially focus on an initiative to expand our efforts in research development for faculty, doctoral students and postdoctoral scholars. Future areas of leadership will include research labs, core facilities, research integrity, and laboratory safety, among others. He joined FIU in 2000 as Assistant Professor, and has risen to the rank of Professor. Administratively, he has served as Chair of the Department of Earth & Environment and Associate Dean of Faculty in the College of Arts, Sciences & Education where he last served as Vice Dean. He received a doctorate of Natural Sciences from the Swiss Federal Institute of Technology (ETH-Zentrum), a M.S. in Geology from Syracuse University and a B.A. in Geology from the University of Kansas. A stable isotope biogeochemist, Bill’s research focuses on biogeochemical cycling of carbon and nitrogen in marine systems, as well as the oxygen, carbon, and nitrogen isotopic signatures in organic material. His research has been published in top tier journals; he has presented in national and international conferences, and has received funding from the NSF, the American Chemical Society, and the U.S. Department of the Interior, among others.

A stable isotope biogeochemist, Dr. Anderson’s research focuses on biogeochemical cycling of carbon and nitrogen in marine systems, as well as the oxygen, carbon, and nitrogen isotopic signatures in organic material. This work/approach is focused on the calibration and reconstruction of the isotopic records from terrestrial and marine archives located in the US, Europe, and South America and Asia. Present work focuses on applying new continuous flow isotope ratio mass spectrometry (CF-IRMS) methods to biogeochemical-orientated projects in the Everglades, the Keys, Florida Bay, and other subtropical locations in South America and Asia. The goal of this approach is to better understand how changes in the hydrologic cycle and environmental conditions (nutrients, pCO2, stress, etc.) affect different biogeochemical systems, which aids in improving our understanding of past and present climatic change.